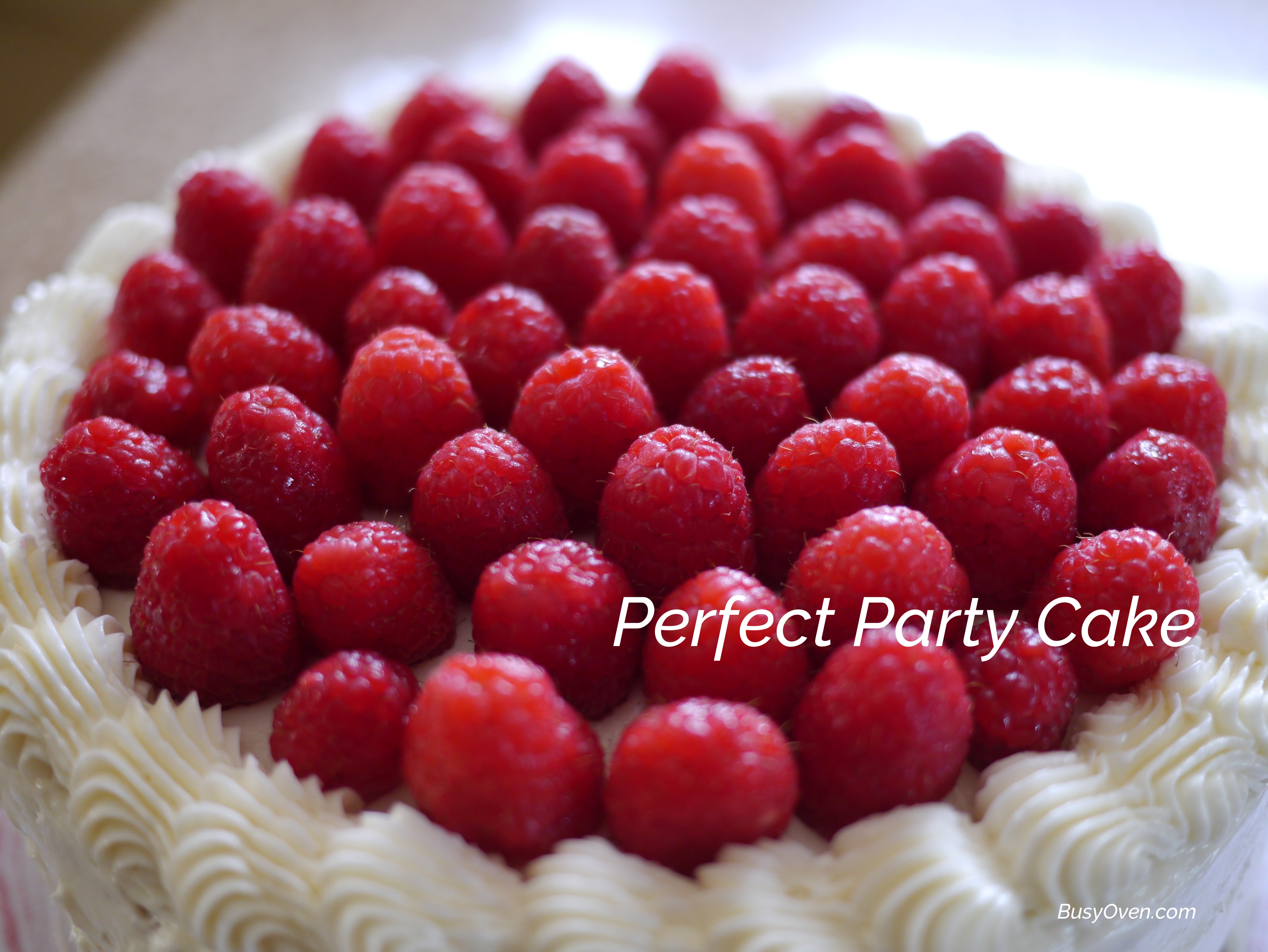 The Perfect Party Cake recipe is one that I had flagged in my copy of Baking from My Home to Yours by Dorie Greenspan; it was one of the first recipes in this book that I made a “must make” note for. I know a lot of October babies, and this cake sounded like the perfect dessert to bring to one of many birthday dinners. I won’t lie, this did not turn out exactly like I had hoped it would (I made a 2-layer cake instead of a 4-layer one). However, the cake still turned out great! This is a moist lemon cake with a raspberry and lemon buttercream filling.

The recipe in Baking From My Home to Yours says to use two 9-inch round pans, but I made a note to myself to try using two 8-inch pans instead. The cakes did not rise as much as I had hoped using the 9-inch pans, so I couldn’t have made a 4-layer cake. I buttered, then lined the pans with parchment paper rounds, then buttered the parchment paper, just to be ensure that the cakes would not stick.

The first part of the batter was preparing the sugar. I rubbed the lemon zest into the sugar until the oils from the zest moistened the sugar a bit.

After the sugar and lemon zest were combined, I threw them into my stand mixer bowl with a stick of softened butter, and creamed the two until they were light and fluffy.

When the butter/sugar/lemon zest were fluffy, I added the lemon extract.

The dry ingredients were whisked together and added to the butter mixture in 3 parts, alternating with the milk and egg white mixture.

The milk and egg white mixture should be whisked before being added.

I weighed my cake batter to make the two cakes as equal in size as possible.

After the cakes baked, they needed to cool completely. This was the point where I decided that i should have used 8-inch pans instead of 9-inch pans.

I made the buttercream while the cakes cooled down. This particular buttercream is a Swiss buttercream. It’s very stable and easy to work with.

The first step was making a swiss meringue. I heated the egg whites and sugar for a few minutes, and whisked them in my stand mixer until I got stiff peaks.

I added butter, little by little, to the meringue and mixed them together for about 6-10 minutes, until the buttercream was very smooth.

I added lemon juice and vanilla extract next. This really brightened up the buttercream.

The buttercream came together nicely, and needed to be used right away.

I got some seedless raspberry preserves, and whisked them until they were smooth and spreadable.

I leveled my cakes, and cut off the crusty edges. After that, I spread the raspberry preserves generously on the bottom layer.

After the raspberry preserves were spread on the cake, I carefully plopped on a layer of buttercream, trying hard to keep the two layers separate.

The top layer of the cake gets placed bottom-side-up. I applied a crumb coat: I put a thin layer of the buttercream all over the cake, and chilled the cake in the refrigerator for 5-10 minutes.

After the crumb coat and cake firmed up a little, I took the cake out of the refrigerator and put on another coat of buttercream. Dorie said to press some coconut into the buttercream, but I’m really not a fan of coconuts. I decided to pipe some buttercream on the edge of the cake, and plop some raspberries in the middle.

I would definitely make this cake again. It’s worth all of the work. My tasters agreed, too.

Perfect Party Cake recipe on page 250 of Baking From My Home to Yours by Dorie Greenspan.