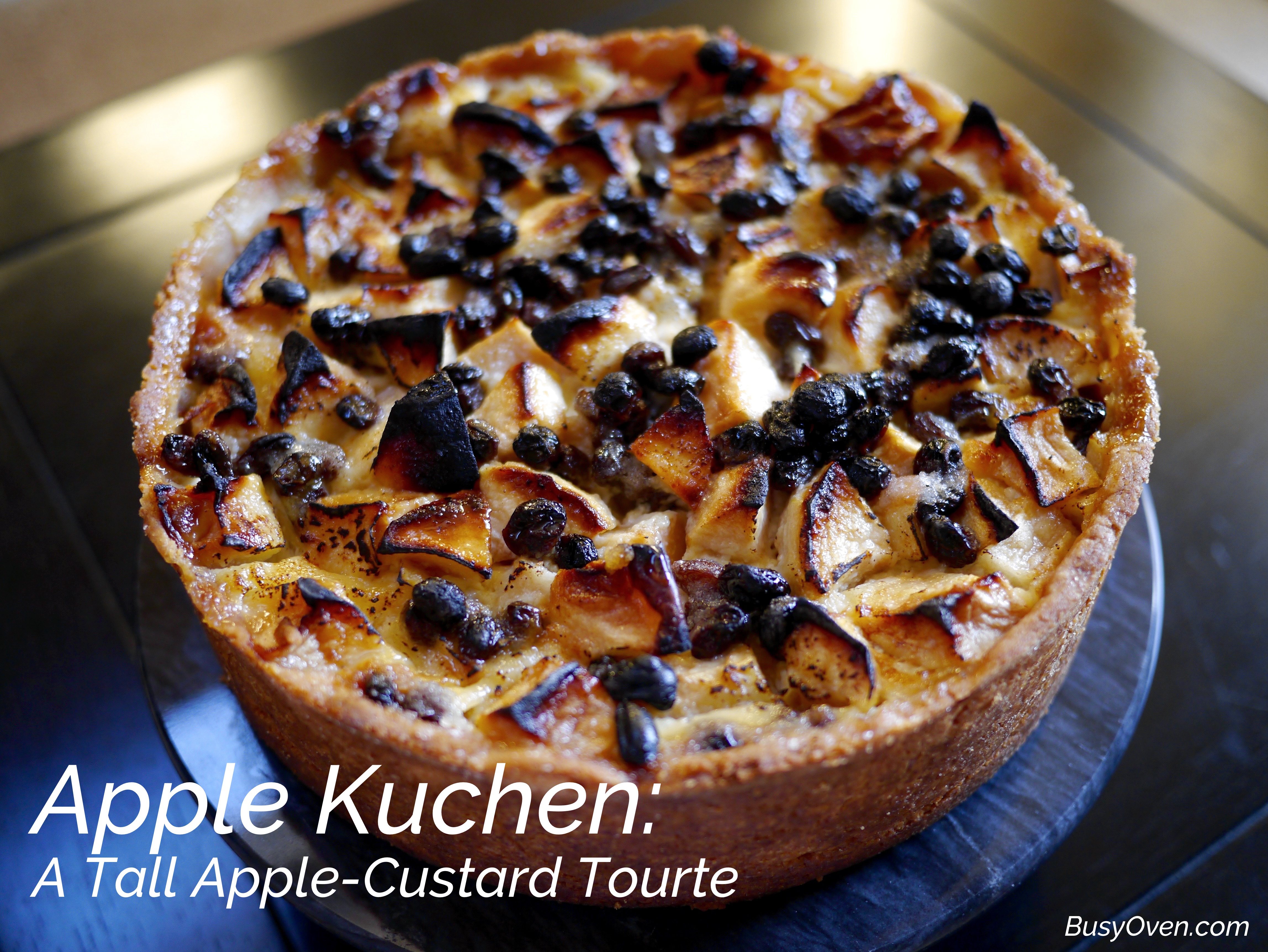 This week’s Tuesdays with Dorie recipe is for the Apple Kuchen: A Tall Apple-Custard Tourte. The photo of this tourte in Baking Chez Moi looks amazing. In fact, it was a recipe I thought didn’t belong under the “Simple Cakes” category in BCM at first glance. There are a few components to this cake: 1) making a crust, like a pie crust; 2) preparing the fruity filling; 3) making the custard that goes on the fruity filling; and 4) brulee-ing the tourte.

The first time I read through this Apple Kuchen recipe, I had to read twice; I wasn’t sure if I really had to make a crust for this recipe that is in the cake category. Then I remembered it was a tourte. I had made pies before, but I had no experience making tourtes.

The first step to this tourte was making the crust. It was pretty much like making a pie crust, just larger, and with lemon zest.

Like a pie crust, cold butter was added and mixed into the dry ingredients until they were like “coarse meal.

Egg yolks were added in next.

The dough came together nicely after a few seconds in the food processor. As Dorie instructed, I made a disc and rolled the dough out between 2 pieces of parchment paper.

This is where things went all wrong and I started experiencing baking rage. The dough for the crust quickly became my nemesis because it just didn’t want to cooperate with me. I rolled it out into a 15-inch circle (sort of) and chilled it for a few minutes. I peeled off the top layer of parchment paper, as Dorie said to do, and flipped it over into my prepared cake pan. Well, Dorie warned that the dough may crack and tear, but mine stuck to the bottom layer of parchment paper, leaving me with gaping holes. I decided to gather the dough again and try again.

Round 2: I thought I’d outsmart the dough by lifting the parchment off of the dough on both sides (to make sure they wouldn’t stick) before turning it into the pan. Success…at least in lifting the paper off. As I turned the dough into the pan, I was slightly off center. When I tried to fix the placement (as delicately as possible), the whole thing just tore again. I decided to give myself 1 more shot before throwing in the towel.

Round 3: I re-rolled and re-chilled the dough, made sure they came off the paper, and tried to aim better while turning the dough into the pan. All was going well. At this time, my hands were so hot because I was enraged by the dough! That meant I had to move extra fast! Well…the crust bunched up in some places on the sides of the cake pan, so I straightened that out. I thought I had it all worked out, until I saw a big air bubble at the bottom of the crust! I tried squeezing it out, but I pretty ruined the bottom.  That was when I basically gave up on making this tourte a handsome one. In the end, I got rid of the hole, and ended up with a crust that would have looked better if I just pressed it out!

After a much needed cool down period for me and the crust, we both carried on. Buttery graham cracker crumbs were added to the chilled crust.

Cubed apples and rum-soaked raisins were then added. Comparing my photo to the one in BCM, it looks like I used too many apples.

After pre-baking the fruit-filled crust for a few minutes, I poured in the custardy filling and popped the tourte back into the oven.

If you look closely, you’ll see that sugar and butter were added to the tourte after I pulled them out of the oven. That’s when I stuck them under the broiler for a little. Things started to smell like they were burning, so I pulled the tourte out. I noticed that there was still some sugar left that wasn’t melted, so I finished heating those patches up with my trusty blowtorch.

I won’t lie. I was afraid of what would happen while I unmolded the tourte. I was so happy to see that the crust stayed together!

As I said, before, I have to disagree with the placement of this Apple Kuchen recipe in Baking Chez Moi. This was not really an easy cake to make, at least not for me. It tasted okay. There wasn’t anything really “regal” or “elegant” about my tourte, as Dorie described hers. I am sure that my fellow Tuesdays with Dorie bakers fared better than I did. I can’t wait to compare notes with them!