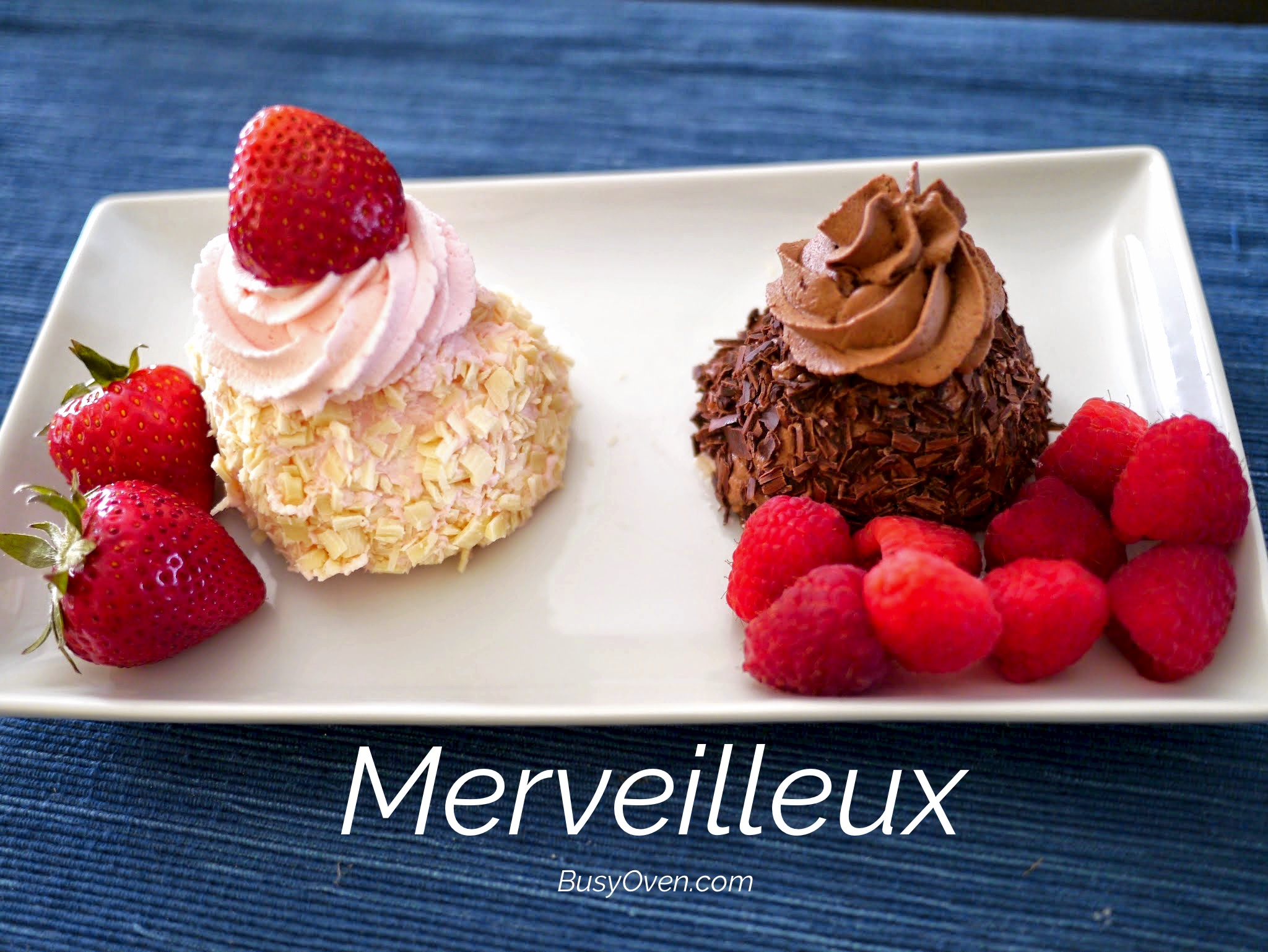 I had never heard of a Merveilleux until a couple of weeks ago, and certainly never tasted one either. I stumbled across a photo of one of these on Instagram or Facebook a couple of weeks ago and I have been obsessing over them ever since, just trying to find a recipe. I looked up photos of Merveilleux on Frederic Vaucamps’s website, drooled, and told myself that I absolutely needed to make them. It looked simple enough to make: 3 meringue cookies sandwiching whipped cream, enveloping everything with even more whipped cream, and covered in a layer of shaved chocolate or anything else that might taste delicious.

“Merveilleux” translated to English is “wonderful.” This seems to be a well-suited name for it! When you eat it, it’s like biting into a very light cloud with a little bit of a crispiness and chewiness to it.

There are a few steps to making a Merveilleux. The first is making a meringue. I used an Italian meringue, figuring it would be stable enough handle having whipped cream on it for a while.

These meringues will sandwich layers of whipped cream by the end of this process. I was not quite sure if smaller or larger circles would be easier to eat, but I can now recommend piping larger circles, at least 3″.  The smaller meringues were harder to stack.

When the meringues come out of the oven, they should be crispy on the outside and soft and chewy inside.  Let them cool and start working on the garnishing and whipped cream.

When the chocolate shavings are done, start whipping the heavy cream in a chilled bowl. My bowl and whisk attachments were both in the freezer while I prepped everything.

Just for the sake of variety, I made a second batch of whipped cream. I chose to use some rose water in my second batch. When the whipped cream was ready, I took one of the meringues and slathered some of the cream and then sandwiched it with another meringue.

Create a third layer and proceed with covering all of the sides with whipped cream until you get a nice creamy mound.  After that, roll the merveilleux in the chocolate shavings and then piped more cream on top.

It’s hard to see, but the layers of whipped cream and meringue are in there somewhere. I would have taken another photo, but I devoured both of these in less than 5 minutes…

I did not have a real recipe to follow, so I decided to experiment with the one I put together below. Next time I think I’ll try using a French meringue.  The Italian meringues turned out fine, but they were a little sticky to work with.

Meringue:
Place egg whites and cream of tartar in a large bowl; beat with a mixer at medium speed until soft peaks form. Increase speed to high, and gradually add granulated sugar and then powdered sugar, 1 tablespoon at a time, beating until stiff peaks form.
Spoon batter into a pastry bag fitted with a large plain or star tip. Pipe circles with a 2″-3″ diameter onto baking sheets lined with a silicone mat or parchment paper.
Bake at 225ºF for 1.5 hours (90min). Turn oven off and cool meringues in closed oven 1.5 hours or until dry. Carefully remove the meringues from paper.

Using both a chilled bowl and chilled whisk, beat the heavy cream until frothy. Slowly add the powdered sugar (and cocoa powder, if using) and vanilla while beating. Whip until the cream becomes light and a thick enough consistency to spread. Be sure to save some whipped cream for the tops of the merveilleux.

Place the chocolate shavings, nuts, etc. in a small baking pan and roll the merveilleux around to coat the sides.
Finally, pipe a swirl of the remaining whipped cream on the tops of the merveilleux.