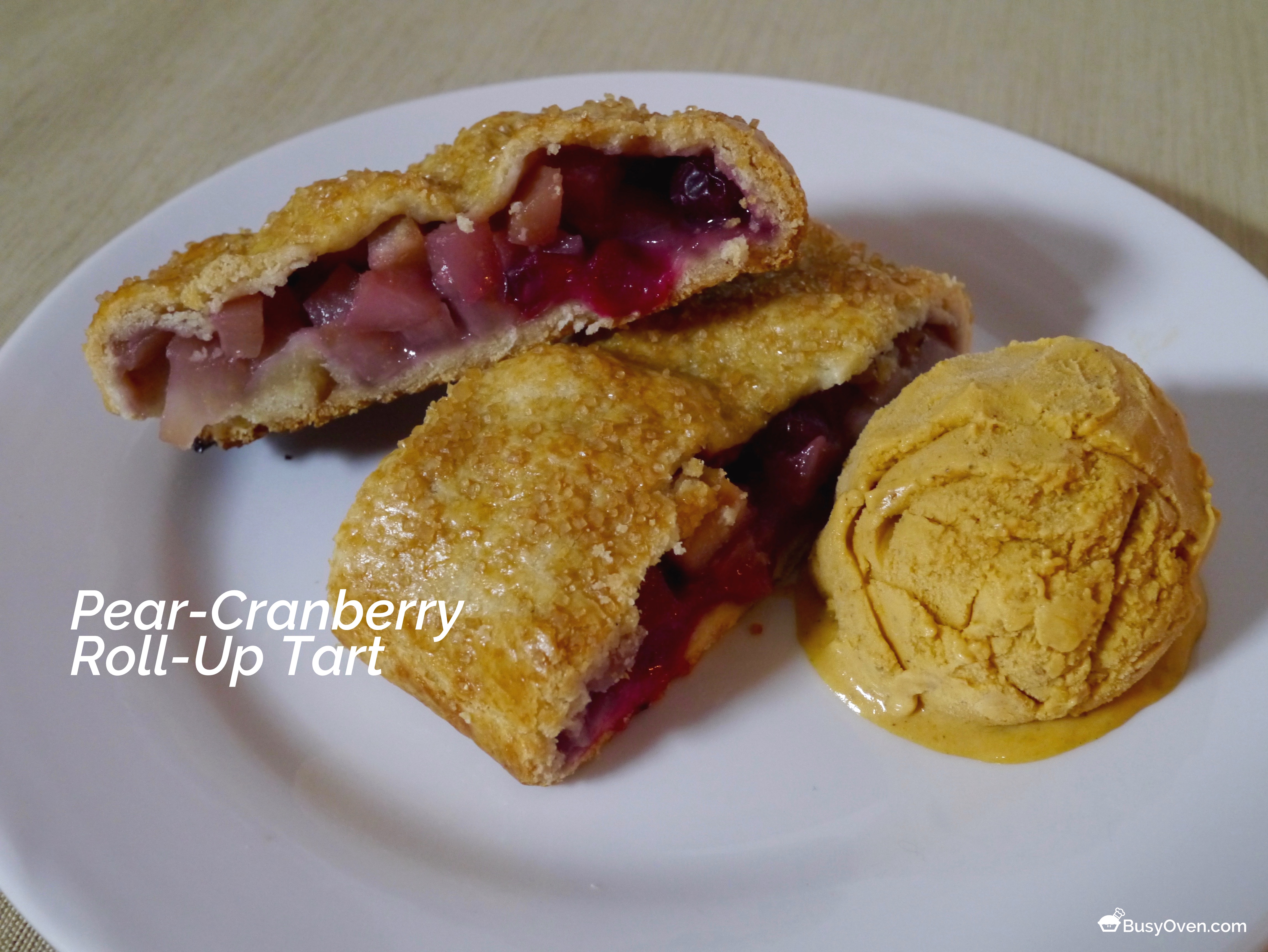 This week’s Tuesdays with Dorie assignment was to make a Pear-Cranberry Roll-Up Tart. This recipe was fast to come together and it ended up tasting great, too!

The first step in making this tart was making a galette dough. This dough only requires a few ingredients and comes together easily, especially if you use a food processor. The dough gets rolled out into a rectangular shape and chilled in the refrigerator while the filling gets made.

While the galette crust dough chilled, I prepared the filling. I wasn’t completely sure what kind of pears to use for this recipe, but I went with D’Anjou pears since they are a firmer pear; they tend to keep their shape (not turn to mush) after baking, too.

The Pear-Cranberry Roll-Up Tart filling needed pears and cranberries, of course, but the surprise ingredients to me were the fresh ginger and jam/marmalade. The ginger ended up giving the tart a nice zingy smell and flavor.

Chopping the pears into little cubes may have been the most time-consuming part of this entire process. I think that should say a lot about how easy it is to make this tart.

The filling ingredients get mixed together, they rest for a bit.

After the dough was done chilling and the filling was done resting, it was time to put it all together!

Not that I made one before, but rolling this felt like I was making a very large dessert burrito. I was surprised that my dough didn’t rip or crack during this process. It got a little tricky keeping the fruits from rolling out, though. It’s always nice having an extra pair of hands to help keep things together!

I tried wrapping the fruits as tightly as I could, and that created a bumpy-looking roll-up tart. At this point, all I saw was a huge burrito. Seriously. It looked less burrito-like after I gave it a generous turbinado sugar coating.

The  Pear-Cranberry Roll-Up Tart baked for a little more than 40 minutes, and turned out beautifully. I watched the tart bake in the oven. I saw some of the juices ooze out of the bottom of the tart instead of through the vent holes. It made a delightfully gooey coating on the bottom of a corner of the tart.

The cranberries and jam dyed the pears a red/pink hue.

This Pear-Cranberry Roll-Up Tart went well with the Pumpkin Ice Cream I made earlier, too. They both had a nice spice-y taste to them; both included ginger. This made the perfect autumn dessert.