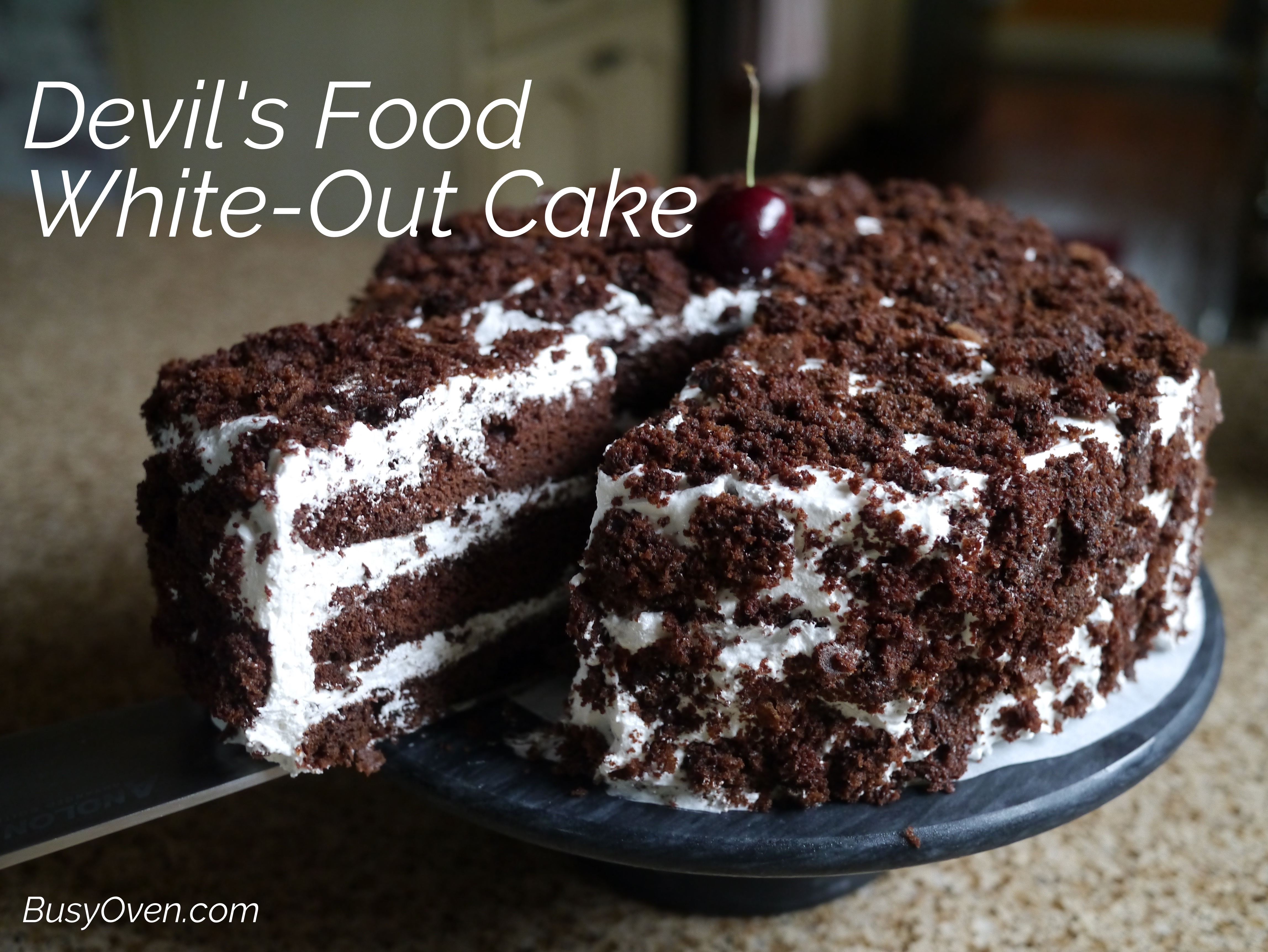 I felt like making a cake so I leafed through one of Dorie Greenspan’s cookbooks. I didn’t have to look very hard because the cover of BAKING From My Home to Yours was staring at me. Well, it was actually the cover photo that was staring at me: a gorgeous layered cake that was just begging to be eaten. So I decided to make this cake called the Devil’s Food White-Out Cake. This cake turned out to be a moist, spongy cake with nice chocolate chunks in each cake layer, held together by layers of vanilla flavored Italian meringue. This makes a great birthday cake for adults because it’s really not that sweet.

The ingredients list for this Devil’s Food White-Out Cake is really long: 14 separate items make up the list just for the cake (5 ingredients for the filling/frosting).

First thing was to prep the chocolate because there wouldn’t be much time to do this later. I chopped the semi-sweet chocolate into bits (which would turn out being the unexpected chocolate chunks in the cake layers), and melted down some bittersweet chocolate before doing anything else.

The next prep step was greasing and flouring two-8″ round cake pans. I didn’t read the instructions carefully so I missed the part where Dorie said to line the bottoms of the pans with parchment paper. Oops.

With the prep-work being done, it was time to start making the cake batter. First was creaming the butter and sugars until they were fluffy.

The Devil’s Food White-Out Cake batter looked curdled at this point, but this is how it’s supposed to look (Dorie said so herself!). The melted chocolate was added at this point.

The batter was nice and thick at this point. I was feeling pretty good about this recipe already! Then it was time to add water. The nice thick batter got runny and I started to have my doubts.

Below is the runnier batter with the chocolate bits I chopped up being mixed in.

The batter turned out nicely. Everything worked out fine. I should really have more faith in Dorie by now.

The cakes went into the oven. I rotated my pans after 15 minutes and baked them for an additional 10 minutes after that. I did a toothpick test and my cakes were ready!

I waited for the cakes to cool completely before slicing them in half.

While the cakes cooled, it was time to prepare the filling/frosting, which was a vanilla Italian meringue.

The meringue gets very thick and fluffy after being beaten for a few minutes on a high setting on a stand mixer.

It was time to start spreading the meringue!

Just spread the meringues between 3 cake layers, and then ice the entire cake after.

When you’re done icing the cake, you will have a nice clean canvas to work with! It’ll finally start looking like a Devil’s Food White-Out Cake! There should be 1 more cake layer reserved for decorating the outside of the cake. Break that apart, and start playing with your food!

Devil’s Food White-Out Cake recipe is on page 247 of BAKING From My Home to Yours by Dorie Greenspan.