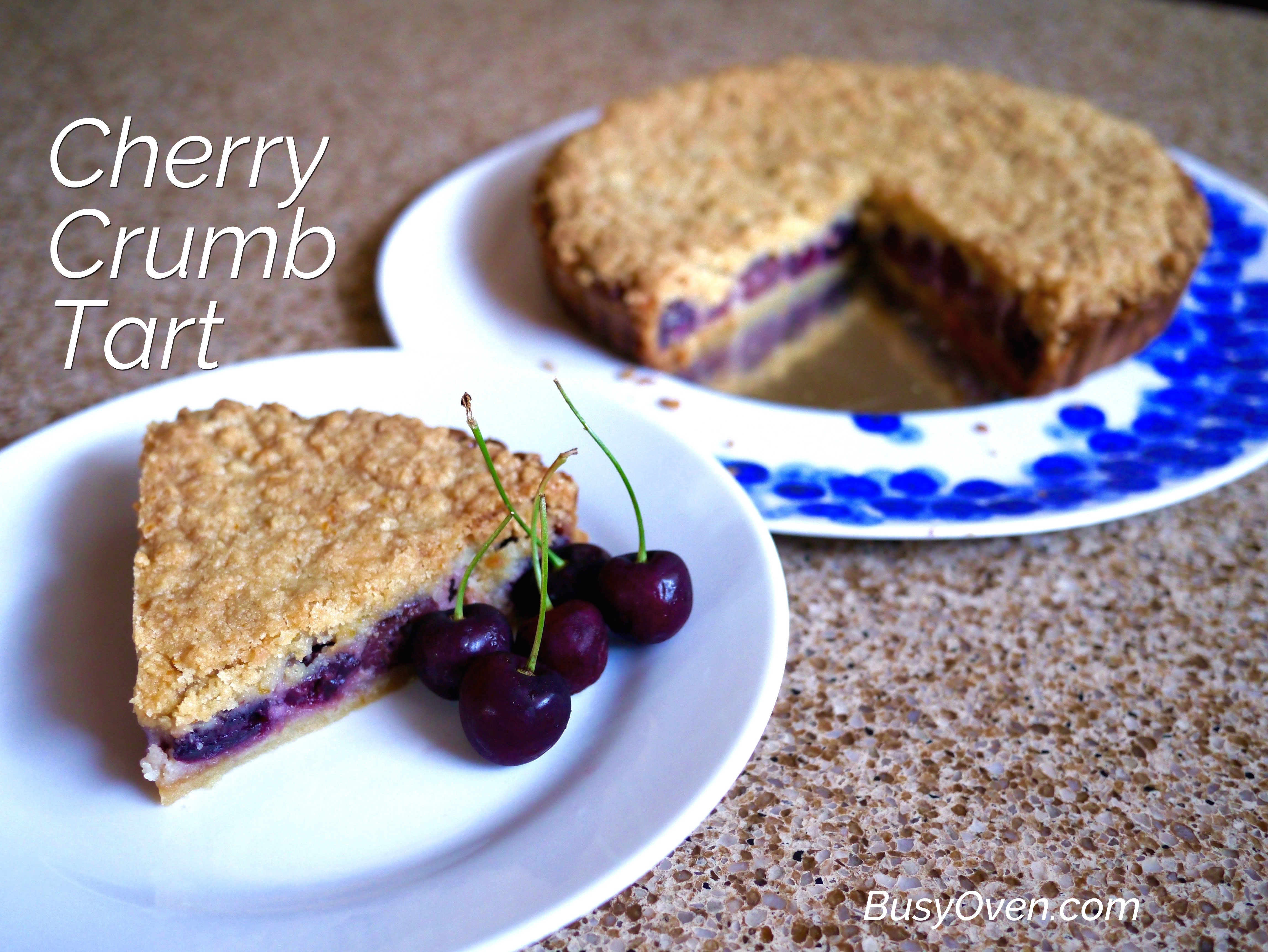 This week’s Tuesdays with Dorie assignment is a Cherry Crumb Tart. Surprisingly, I think this is my favorite tart in Baking Chez Moi so far! I really didn’t expect this tart to be so good, but once I bit into my first slice, I could get the undertones of the orange zest in the streusel, a light almond flavor from the filling, and of course the cherry flavors from both the fresh cherries and the kirsch.

Dorie’s Sweet Tart Dough is the perfect dough for tart and pie crusts, in my opinion. It’s extremely easy to make, thanks to a food processor, and it has a nice sweet crunch to it. I just put together one crust and popped it into the freezer until it was ready to bake.

The next step was making the streusel. I was surprised to see orange zest and cardamom listed as ingredients, but they ended up being some of the highlights of this recipe.

Like the galette recipe, Dorie said to rub the orange zest and sugar together with your fingers. This smelled so good. This alone is enough reason for me to make this tart.

The next step was to add the dry ingredients to the sugar and orange zest.

Cubed butter was added to the mixture, and worked together with my fingers until they became little lumps.

Finally, I added vanilla extract and put the streusel into the refrigerator.

The next step was making the filling of the tart.

Like so many other recipes, butter and sugar were creamed together until smooth.

Next, the almond flour and cornstarch were added, and mixed until smooth.

Eggs were added, one at a time.

Finally, vanilla and kirsch were added. This was mixed for another quick minute, and then stuck into the refrigerator.

Dorie suggested using a chopstick to pop the pits out of the cherries. I tried it out, but it wasn’t working for me; I was just destroying the cherries with my hands. I tried cutting the cherries in half and taking the pits out that way, but I ended up only getting one nice half (the pit was stuck to the other half and I ended up destroying that half). I resorted to looking up “how to remove pit from cherries” videos on YouTube and found that people used a chopstick to pop the pits out while the cherries sat on a bottle. I thought it looked simple enough so I gave it a try. I stuck a cherry on top of a bottle of water and pushed through the top of it (where the stem was), but my cherry ended up going into the bottle… I tried again and my cherries either fell in or the skin of the cherry stayed on top, and the fleshy part went into the bottle with the pit. I tried a beer bottle. The opening was a little smaller than the one on the water bottle. This worked a little better, but my cherries still popped into the bottle! I gave up on the bottle method and went back cutting my cherries in half again. It bothered me that I couldn’t get the bottle method to work, so I decided to try again, but this time turning the cherry upside down. I jabbed a hole from the bottom of the cherry, pushing the pit out through where the stem was, and the pits came out, and the cherries stayed on top of the bottle! What a revelation! Of course by this time, I had cherry juice all over my kitchen, clothes, and face. It looked like a crime scene, but I didn’t care. I had pitted cherries!

At this point I had my tart crust, tart filling, pitted cherries, and streusel. It was time to assemble everything.

The first step was slathering the filling in the partially baked tart crust.

The next step was to place the cherries onto the filling in a single layer.

I baked the tart and the filling puffed up, almost covering the cherries. At this point, I added the streusel and baked it a little longer.

The end result: a beautiful Cherry Crumb Tart. I really think this is best eaten still warm. The streusel is amazing while it has a crunch to it.  This tart really isn’t too sweet, probably because of the fresh cherries. Even though there are a few steps to take to making this tart, they’re worth it! This tart is delicious!