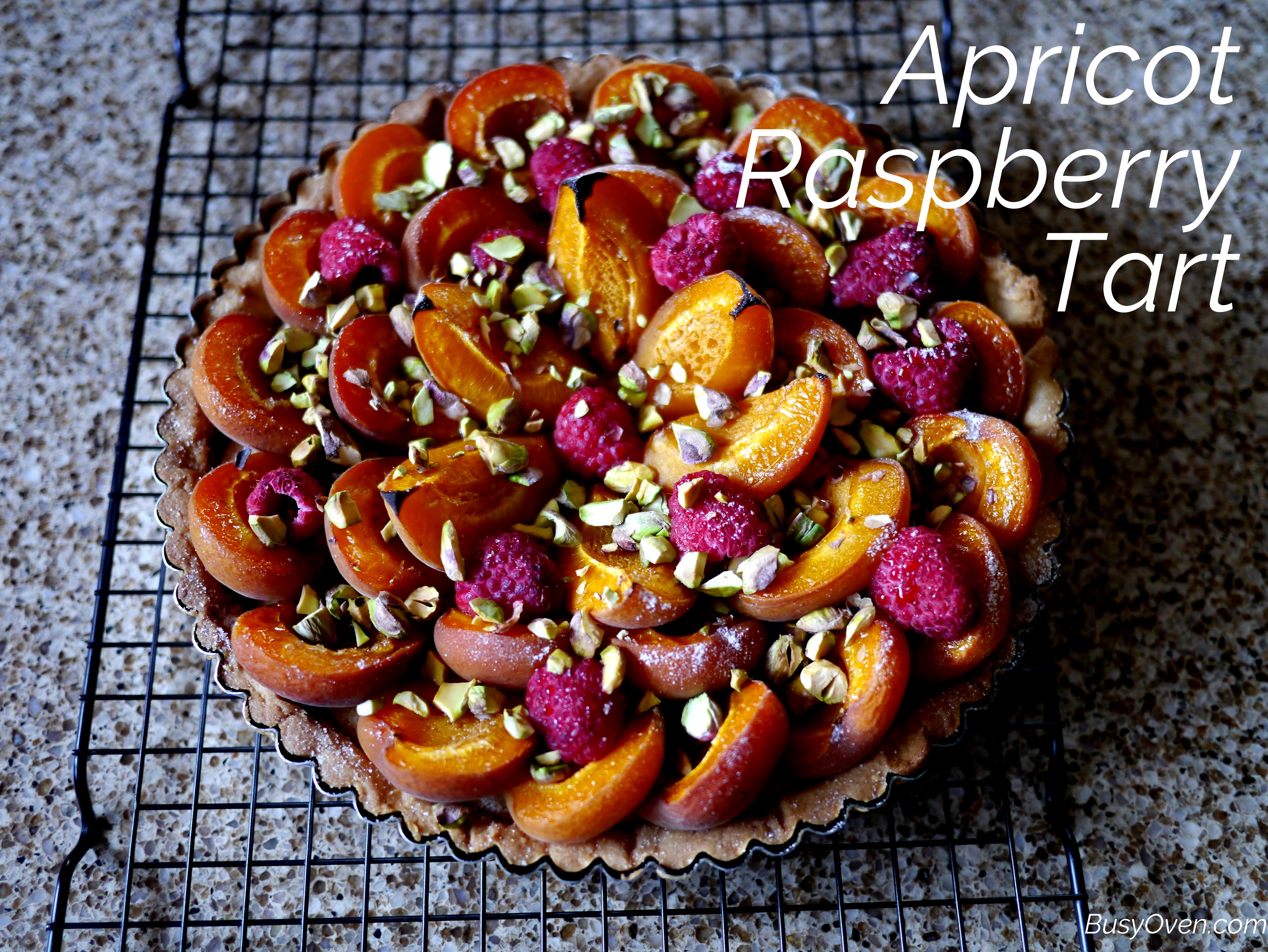 This week’s assignment for Tuesdays With Dorie is an Apricot Raspberry Tart from Baking Chez Moi by Dorie Greenspan. Admittedly I was partly apprehensive about making this tart because a photo was not included with this recipe! This tart ended up looking very festive and having a lot of textures to it. If you like apricots, then you’ll love this tart.

My own experience with apricots is very limited; I had only eaten dried apricots, and I wasn’t a big fan of them. Without saying, I wasn’t too excited about this week’s assigned recipe. However, I’m glad that I’m baking with the Tuesdays with Dorie group, because it’s forcing me to step out of my comfort zone by trying new things.

There are a few steps to this tart. The first is preparing the crust. No special ingredients are needed for the sweet tart crust: just sugar, flour, salt, butter, and an egg yolk.

After the ingredients were mixed in a food processor, the dough was lumped and rolled out. Dorie wrote that she doesn’t chill her crust dough before rolling anymore; she rolls it right away because it is easiest to work with at this point.

Dorie was right. After the dough is rolled out, it is chilled in the fridge for an hour. While the dough chills, it’s time to prepare the next step: the lady finger disc (disk?).

The ladyfinger disc does not require many ingredients. I forgot to prepare my sugar beforehand (I remembered measuring sugar but it was actually the sugar for my crust).

I whisked my separated egg yolks and put them aside while I started on my meringues.

I thought I’d add this photo as proof that I remembered to add sugar!

I added what was stuck in my whisk to the egg yolks and mixed until smooth.

I knew it was done when it started looking like mayonnaise.

I added the “mayonnaise” to the remaining egg whites, but only mixed a little, per Dorie’s instructions, and then it was time to add the sifted dry ingredients and fold everything together very gently, but rapidly.

It can be tempting to overmix the batter at this point. Don’t do it.

Pipe out a round disk that will fit in the tart crust, and pop this into the oven. My piping needs a lot work. Fortunately this disk will be covered with fruits. There was excess batter, so I thought I’d make regular ladyfingers. They turned out so horribly that I couldn’t share the photos here.

After the ladyfinger disc was done baking, the tart crust went into the oven. It’s nice because they both bake at the same temperature.

While the tart crust baked, there was time to chop some pistachios.

When the tart crust was done baking, I had to let it cool before beginning the assembly of the tart.

I washed, cut, and pitted what seemed like 100 apricots. Again, I had never worked with apricots before so I wasn’t sure if I was supposed to leave the skin on or take it off. I did an emergency google search for this and found pretty much nothing. I decided to leave the skins on, just because I didn’t feel like peeling the skins off of the thousands of apricots I had.

There are 3 rounds of baking. The first was just baking the apricots in the crust.

The next baking step was to add raspberries.

Finally, the pistachios were added and the tart went back into the oven for one last time. In the end, this turned out to be quite a treat. It looked like an autumn dessert to me, but it was still great to eat. The ladyfinger disc did its job well, and the pistachios gave the tart a very nice crunch to it. Overall,  I was very pleased [that my ugly disc was covered up].